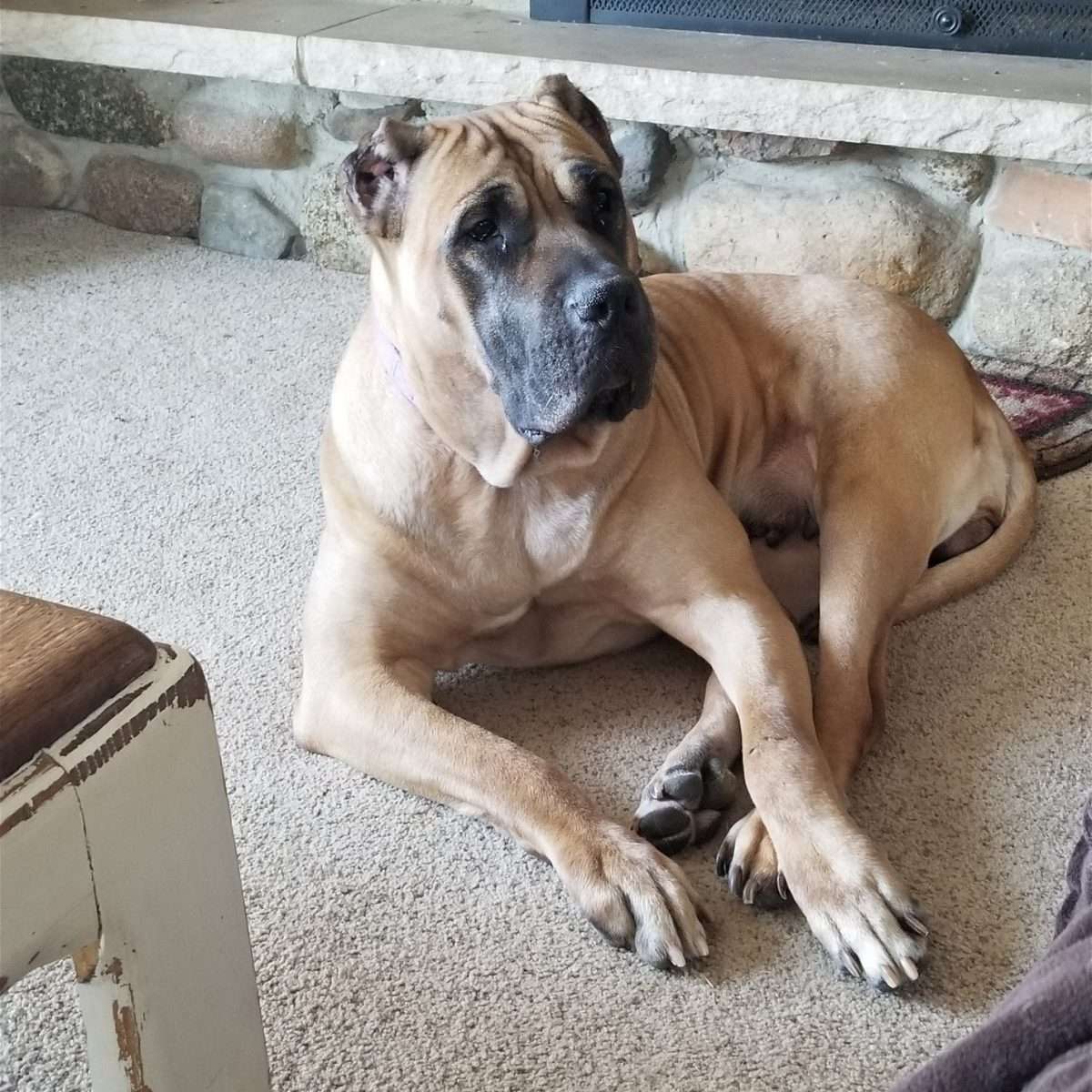 The Story of Luna Mae

Luna Mae was surrendered to Minneapolis Care and Control in November by a friend of her former owner. The friend said Luna and another dog had been abandoned, as their owner left the dogs and never returned. They would need a more permanent living situation and, since they were considered unclaimed, would need animal control’s assistance to place them in the care of an organization or person well-equipped to take on two extra-large dogs.

Luna clocked in at roughly 90lb upon examination, and her age was estimated at 7 years of age. At first glance, it would be appropriate to assume she had given birth multiple times. And it is likely that the dog who was surrendered alongside her, a young pup named Saint, could be her son. When her microchip was scanned, it registered to Romania, raising additional questions about her past that will probably never be answered.

After entering Ruff Start’s care with one of our more experienced large-breed fosters, we learned more about this gentle giant of a girl. Described by her foster family as “perfect,” Luna shows no signs of whining or separation anxiety (despite being abandoned!), loves other dogs and tolerates friends of the feline kind, and greets new people with tail wags and love. Relaxing is her favorite thing, and she is a super quiet, docile beast of a snuggler to boot.

However, while we learned more about Luna’s traits and what type of home would best fit her, we also learned about her medical needs.

While in MACC’s care, they documented several concerns needing addressing once Luna was rescued. Her left eye looked cloudy; she had luxating patellas that produced a grating sound when shifted and significant right hindlimb lameness. Luckily, Luna had no resistance or pain during a standard manipulation of her hip. Still, elbow issues – potentially arthritis – were suspected, as well as the need for a dental cleaning with potential extractions. With these notes, we knew when we took her in that she would need a higher standard of care than most of the animals that entered rescue. However, the extent of her medical future was still largely unknown.

Luna visited one of our partner veterinary clinics, where they spayed her, brought her up to date on her vaccinations, and did radiographs of her pain points. While her surgery went well, her day at the vet revealed the next steps for the sweet pup. The most intensive notes in her report read, among other things, “Recommend bilateral repair of CCL ruptures.”

In human terms, Luna needs a bilateral TPLO. She needs both knees operated on simultaneously to repair their cruciate tears, a costly procedure with a significant recovery time, including extensive therapy. She also needs a dental procedure, another surgery which could not be done at the time of her spay. In all, Luna’s care will total roughly $4,000.

While this is a hefty bill – especially at the end of a long year full of need – we committed to giving Luna stability and love when we chose to bring her into rescue. One look at her droopy face is enough to know she is worth it, and her foster family is determined to see her through her treatment… with your help.

Every donation, big or small, counts for this precious pup who is in need of significant pain relief. Will you give a year-end gift to help us fund Luna’s treatment and make her New Year?