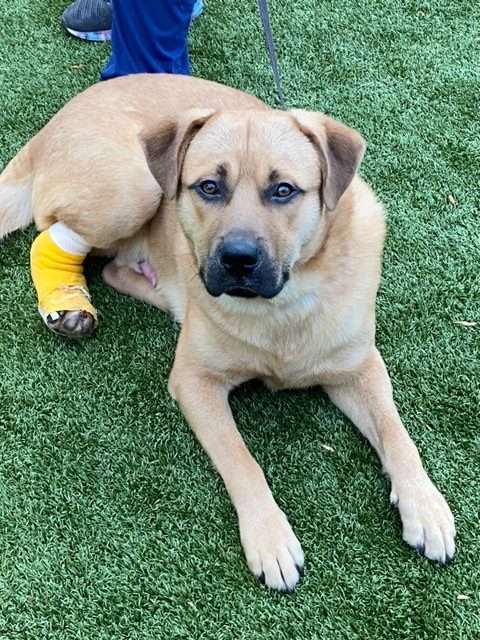 The Story of Reggie

Imagine walking around, searching for help…with the muscles and tissue in your leg exposed for weeks. This was Reggie’s reality.

The 2-year-old lab mix managed to eventually find help from a local rescue after multiple weeks of living on his own, wandering aimlessly and trying to survive with only three good legs – one was partially degloved. An open sore on his leg was infected, swollen, and needed urgent medical attention. And although he had been alone and struggling to survive for weeks, he greeted his rescuer with loving tail wags and gratitude in his eyes – because he knew his reality was about to change for the better, we’re sure.

He was quickly taken to a veterinarian who suspected that, based on the damage to his leg, Reggie likely got his leg stuck in a trap while on the run and somehow got himself free. Initially, the suggestion of care for him was to amputate his troubled leg.

But, after further assessment, his vet was determined to give this young, energetic pup an opportunity to live a life with all four of his legs – after all, he’d managed this far, and it was apparent he had a fighting spirit!

Shortly after receiving preliminary care, like consistent bandage changes and wound cleaning, Reggie started healing. But the healing was slow, and he needed a safe place to maintain his comfort while awaiting a new family. That’s when we stepped in.

Reggie was transported emergently to a Ruff Start foster who has extensive experience helping animals in need and is well-equipped to provide the love and attention he will need to fully heal.

Now that he is in our care, as so often happens, Reggie is truly becoming a reformed rescue pup. Despite the grueling healing process, he is being subjected to – rest and relaxation – we’re finding he is not a dog fond of staying still! It’s obvious how he could survive in the wild on his own – he has an exuberant spirit and wants to live a full life. Luckily, he found us, and we’re determined to give that to him.

Today you have the opportunity to change the lives of more animals like Reggie. Give today!