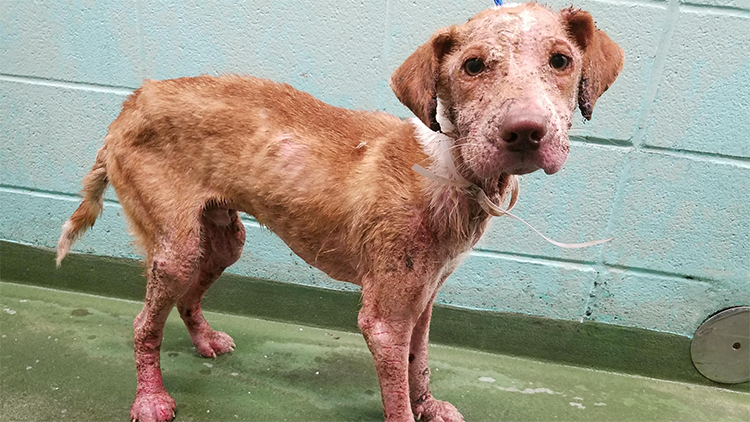 To look at him when he was found wandering the streets in Houston, TX, many would not have offered much hope. When he was picked up by animal control and taken to BARC Animal Shelter, he was in serious condition and needed immediate help. Thankfully compassion, love, and optimism prevailed over other options, and a new life was about to begin for Diego that day.

“He was in bad shape,” Carlos Ortega said. “He was not healthy at all, and he actually looked worse in person than he did in the pictures we saw of him. Much of his coat was missing, he had open wounds that were bleeding and oozing from infection, and his paws were extremely swollen. He was a big mess.”

Ortega and his wife volunteer at the shelter and took Diego home. That’s where they started him on his road to recovery and his new journey.

“The first thing we did was give him a bath,” Ortega noted. “Next, we called the local veterinary clinic and got him in to be checked over.”

Ortega said Diego was in such tough shape that after being seen at the clinic, they recommended he stay there for few days to initiate proper treatments and monitor him. The clinic started Diego on a diet plan, hydrotherapy procedures, medicated baths, and skin conditioning.

Ortega said that when Diego went back home with him and began healing, his personality started to develop and come out. Ortega believes that Diego had been a family pet at one time because, despite his condition, he was friendly and social, displayed no signs of aggression, and was, to his surprise, house trained. But Diego’s past remains unknown; whether he was a runaway that got lost and couldn’t find his way back home or if he was intentionally discarded and abandoned, only Diego knows.

Ortega believes that Diego had probably been out on his own for at least a few months because of the traumatic condition he was in when he was found.

“We’ve been fostering for many years, and Diego was one of worst health cases I’d ever seen,” Ortega said. “The condition he was in didn’t occur in just a couple weeks of being out on his own. It took a while to get that bad.”

Ortega and his wife nursed Diego to a healthy enough condition that he could be safely transported. Ortega has worked with Ruff Start Rescue (RSR) for about a year-and-a-half, and he was able to help coordinate the transfer of Diego from the Lone Star State to North Star State.

“By the time he left Texas, Diego was on a healthy diet plan, his swelling had gone down, and we were able to take him on short walks, and his open wounds were closed and scabbed over,” Ortega reported.

When Diego arrived in Minnesota in mid-November, he was still considered ‘skin and bones’ compared to normal standards, but the fosters who received him and cared for him were already well aware of Diego’s recent background and worked hard to continue the wonderful work that Ortega had started in Texas.

Rescue Foster Shelby Anderson said the first thing she noticed about Diego was how well-behaved he was.

“I would pet him and reassure him as he was going through his medical procedures and even while he was getting his baths, and he would just stand there and endure whatever was happening and lick my hands,” Anderson said. “He was very well mannered.”

The other thing Anderson noticed almost immediately is how loving Diego was.

“He’s filled with so much love and joy,” she said. “No matter what happened to him in the past, if he was abused or abandoned or whatever, he has so much love for people, and I don’t how.”

“He’s a snuggler and a kisser and was so easy to be with,” Anderson continued. “He just wanted to be loved and offers lots of love in return.”

Anderson and her husband have been RSR fosters for a few years. They like to take the “tougher” cases and have developed a good relationship with RSR intake coordinator Meaghan Dubbs.

“I hadn’t even seen a photo of Diego when I was asked by Meaghan if we would be interested in fostering him,” Anderson said. “Meaghan contacted me because she knew we would be a really good fit for him.”

“I was told, before we got him, that he didn’t have a lot of energy because he was healing,” Anderson continued. “But what a surprise. He had tons of energy, and that also showed us that he was healing well. Depending on his energy level, we called him Spicy Diego or even Diablo.”

“Fostering is such an amazing experience,” Anderson said. “Dogs like Diego show us what patience, love, and caring can do. No matter what they have been through, and Diego had just been through the wringer, their transformations are amazing, and they’re such an inspiration.”

Anderson also admitted she was almost a foster failure with Diego; meaning, she debated keeping him and adopting him herself.

“You get so attached to every animal, and you always think that you should keep the one you’re looking after,” she said. “But then you receive the perfect adoption application from a wonderful family, and you just know they belong together.”

However, Anderson said the handoff is still emotional and hard. That handoff occurred in early January. His adopters live in the Twin Cities area and wish to defer the spotlight to Diego.

In an interview, the adopter said he was attracted to Diego because he was the same size (class) as their current dog, Frank, and because he wasn’t a puppy. Plus, Diego looked to recover well.

“Diego was the right size and was family healthy,” the adopter said. “I had an elder dachshund who died about a year ago, and it was time to get another dog.”

He added that Diego is good for Frank, too, and said Frank, also adopted as a rescue, is now more active and has been playing a lot more. He said the two dogs live and play very well together.

Diego likes the dog park and is getting more confident with every visit, the adopter noted. Initially, Diego was afraid of the other dogs at the park, but with Frank sticking up for him and by his side, Diego’s confidence has grown, and now, with his tail up high like a flag, he runs and plays “like mad” at the park.

His adopter reported that Diego is settling in well. He continues to heal nicely, and his coat keeps coming in thicker and softer. He added that when Diego first arrived at their house, he was a bit afraid of outside noises. But as he’s become more comfortable in their home, he now lets people outside know that this is “his house and to back off.”

The dog who arrived in Minnesota, described as “bones covered in scabs,” is now living the life every dog should have. He is in a wonderful, loving home and is being cared for as a member of the family.

Diego’s story and so many others like it are a true testament to animal advocates, rescue organizations, the countless caring volunteers across the rescue network, the wonderful fosters, and the loving adopters who take them in as their own.