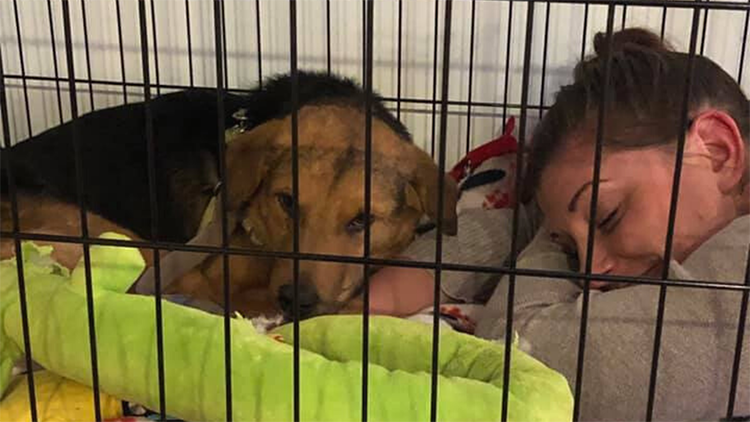 Found wandering the streets in Houston, Texas, he was skittish, reserved, and very cautious of those around him, especially men. His behavior suggested he may have experienced abuse in his past.

After being rescued, he spent time with two different fosters in Texas while waiting for his scheduled transport to Minnesota. Just hours before he was to be loaded and head north, he got loose, ran, and missed the trip. He was eventually found and then remained with his foster until the next transport.

When he finally got to Minnesota, he arrived with two leashes, a harness, and a GPS attached to his collar. He had gained (and earned) a quick reputation of being a “runner.”

He was welcomed in Minnesota by a temporary foster, where he soon lived up to his reputation; he got loose and ran again. This time he was missing for five days before being located.

Meet Tucker (formerly known as Tuckar), the energetic, one-year-old pup who, despite his elusive behavior, won the hearts of his fosters and his adopters.

Tucker finally ended up with Ruff Start Rescue foster Crystal Polipnick, who got him on October 9. Polipnick and her husband knew he would take a lot of work and dedication, but they happily began the trust-building process.

Not only was Tucker a flight risk, Polipnick reported he was also on oral heartworm medication when they received him.

“The oral medication process acts much slower than injections,” Polipnick said. “But we couldn’t do the injections because he didn’t like his back area or back legs to be handled. We had to use the option that worked on his terms.”

Polipnick said although he was skittish and apprehensive of males, it was actually her husband who was the one who got him to take his treatments.

“Everything we did was done in a way to ensure his success,” Polpnick said. “We even worked with a professional trainer.”

When it came time to promote Tucker’s adoption, Polpnick said they knew there was still a lot of work to be done with him and that he’d need a home with a fenced-in yard and no other dogs.

Ali Peterson and her husband, James Babcock, found Tucker on the Ruff Start Rescue adoption site and were immediately attracted to him. Peterson said after they saw him, they kept going back to his pictures and bio. Shortly after, they submitted an adoption application.

“We received the application from Ali, and then she kept checking in. That said a lot about her and James,” Polpnick said.

Polipnick said they scheduled a meet-and-greet, and when they visited Peterson and Babcock, they brought Tucker into the house in his crate and with his leashes on.

“Surprisingly, it didn’t take him long to come out of his kennel,” Polpnick said. “We met for about an hour-and-a-half, and it went really well. We showed Ali and James all of Tucker’s leashes and his GPS, and it was encouraging that nothing we covered seemed to scare them off. They weren’t deterred at all.”

Polpnick knew that Peterson and Babcock would need to take it slow but also felt they would be a good fit for Tucker and proceeded with the adoption, which was finalized on Dec. 20.

Peterson said that she and Babcock both had dogs growing up and wanted to continue that tradition together, but first needed to provide the right environment.

“Once we moved, our goal was to get a dog,” Peterson said. “We found Tucker, and both adored him. We read his bio and knew that he might have come from an abusive past and needed a quiet home. We do have one adopted cat, but we knew we could provide the right place for him. We got him the weekend before Christmas.”

Peterson said they have continued the work that Polpnick and the other fosters began with Tucker.

“We’ve worked on everything with him,” she said. “We’ve made a lot of positive strides over the past several weeks. We know where we can and can’t touch him, and we’re still working on being able to pet him with two hands.”

“He likes to get on the couch with us,” she continued, “but he’s still pretty reserved and stays in his area where he can exit quickly. He’s not a cuddler.”

Regarding his apprehensiveness towards males, Peterson said Tucker is establishing trust with her husband and likes to sit behind him while he’s working.

“But when I’m on the floor doing my workouts, he’s all over me,” she added.

“He’s an oddball, but in a good way,” Peterson said. “He definitely is on his own track and is progressing well.”

“He’s very smart,” she added. “You can tell he’s been duped a few times in his past. That’s probably why he’s so cautious and why we still have to build trust.”

Peterson offered examples like, if he’s laying down and they come up behind him, he gets up immediately. She added that he doesn’t like people to be outside his field of vision and that they’re still working on car rides.

Ironically, however, Peterson said Tucker does pretty well around new people, and he gets jealous when they leave without him. She said he’s fully house-trained and eats and drinks really well.

She said Tucker is an entirely different dog outside than he is inside. While inside, he’s pretty mellow. He likes to play with his toys and the cat’s toys. He likes to hang out with them when they’re in the kitchen and living room. And he likes to spend time looking out the windows.

Peterson said he likes to go out but still has to have his combination of leashes. And, she added, since he’s on his heartworm medication, they’ve had to limit his time outside. That will change once he’s off his medication and the weather gets nicer.

After being found as a stray who may have run from an abusive situation, Tucker has found his forever home where he can be comfortable. His trust level will increase, and he’ll continue to learn that Peterson and Babcock have nothing but love and happiness to offer him.

Tucker’s fate may have been completely different if not for the wonderful work of the fosters who never gave up on him, even after he did run from them. Tucker is in a wonderful, loving environment with Ali and James, who have made him part of their family.

← Saving Animals on the Border
The Dog Meat Trade →