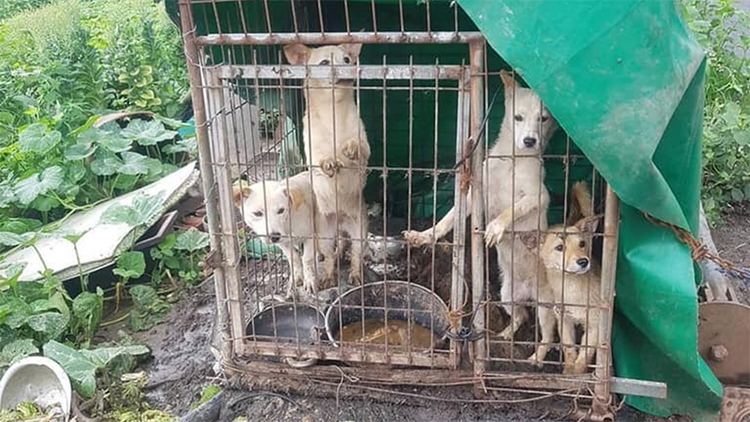 Editor’s Note: This is a graphic and disturbing article, but we feel the detail is important to convey the article’s context. This act, while horrific, does not define a whole group of people. Please keep in mind that change takes patience, understanding, and respect. Positive animal welfare reforms are happening.

According to Jenni Smith, intake coordinator at RSR, over two million dogs are consumed annually in South Korea. But that’s just a fraction of the dogs and cats that are butchered for human consumption throughout Asia. There are no known numbers from North Korea, and it’s estimated that 10-20 million dogs and cats are consumed in China and five million in Vietnam. Indonesia is also believed to have dog and cat meat trade operations.

However, South Korea is the only country where it is still legal to operate dog meat farms. There are 17,000 known dog meat farming operations in South Korea. But the legality of those operations falls in what many consider a gray area. For example, it is illegal in South Korea to kill dogs for their meat, but it is not illegal to consume dog meat because, by law, dogs are considered “livestock.” Therefore, they can be raised on farms as such.

Additionally, the South Korean government has been inconsistent about shutting these operations down, even knowing the end result of the farm’s “livestock.” Typically, the farm operations are only shuttered if the owner doesn’t have the proper, updated paperwork or permits.

Smith and RSR work directly with three different rescue groups in South Korea. She said last year RSR brought 30 dogs through the organization from South Korea. However, she was quick to add that the COVID-19 pandemic really brought this rescue process to a halt, but it is starting to resume operations, and there was just another transport in the past couple of weeks.

The dogs, after being rescued, having passed all of the strict guidelines, and after being cleared by U.S. government organizations like the USDA and FDA, can then be transported out of South Korea. From South Korea, they are flown to Chicago. From Chicago, RSR works with an organization called Pilots N Paws (PNP), a nonprofit group of volunteer pilots who fly rescued dogs to their designated locations. When PNP transport is not available, RSR coordinates with associates in Chicago to meet in central Wisconsin for hand-off vehicle transports to Minnesota.

Although the practice of consuming dog and cat meat is trending downward, it is still a tedious process for the animal advocates in South Korea to rescue these dogs and cats and get them to safe locations like RSR.

“The South Korean rescue operations sometimes meet opposition and are up against claims that the dogs they are rescuing are sick. But the USDA permitting process is very strong,” Smith said. “And although there might be a misconception that dogs rescued from the meat trade and brought to the U.S. are diseased, that’s just not true. When these dogs clear all of the forms and permits required and pass U.S. government regulations, they’re perfectly healthy.”

“It’s a fear tactic. Some of the healthiest dogs that come through (RSR) and other rescue organizations are those from South Korea,” Molly Nemec added. Nemec is an animal advocate and a national leader in rescuing dogs and cats from the South Korean dog meat trade (DMT) industry.

Although Americans, and most of the world, have a clear objection to the practice of consuming dog or cat meat, it is important to at least understand this is a centuries-old tradition in South Korea, and changing this practice will take time. Ruff Start Rescue is one organization that has become actively involved in that initiative.

According to the Humane Society International, there is increased vocal opposition to the DMT due to the cruelty and torture of the animals involved and the human health conditions attributed to consuming DMT meat.

Nemec said many activists and rescue groups are working hard in South Korea and throughout Asia to end this practice. Most of the dogs rescued are from DMT farms shut down by the South Korean government. But even so, she said it’s very common for the animal advocacy groups to run into “culture,” “tradition,” or “hunger and survival” as excuses to continue the practice.

Nemec also said hearing claims that the meat is used to help cure hunger has little validity, as South Korea has one of the richest economies in the world (South Korea is ranked 11th in the world in Gross Domestic Product (GDP); the monetary market value of all goods and services produced in the country.).

“South Korea is a wealthy nation,” Nemic said. “Dogs and cats do not have to be eaten for survival. And, it’s important to remember that cats are involved in the DMT, too.”

Nemec and Smith both commented that, for the most part, it is an aging male population in South Korea who keep this practice alive. The average DMT farmer is male and is currently in his 60’s or 70’s. So why do they do this? It’s apparently believed this meat has “mystical” or “healing” power to enhance their bodies. But it goes beyond that, as it’s also believed the meat’s power is intensified through torture.

“Eating an animal is different than torturing an animal,” Smith interjected. “It’s (somehow) believed the more the animal is tortured before it is finally killed and butchered, the more adrenaline it produces in its body, which then somehow has a positive effect on the human who consumes it.”

“This is not magical meat,” Nemec emphasized. “This is purely an act of ignorance, superstition, and cruelty.”

Nemec offered another scenario, “They claim most dog meat is consumed in June, July, and August because the meat cools their body during the hot summer months. But they eat just as much in the winter months, saying it warms them. They contradict their own superstitions while trying to justify it.”

Nemec first learned of the DMT in late 2015/early 2016 and jumped right in to do anything she could to help. She works with many organizations and individuals throughout the U.S. and worldwide. Nemec said she began working with RSR in 2017.

“It’s important to tell the background of where these animals come from,” Nemec said. “Seeing the final happy ending of a rescue initiative is great, but it doesn’t solve anything. People have to hear the truth to help make a change. The truth is, it’s graphic, it’s cruel, it’s disgusting, and it’s horrifying. Sugarcoating the reality of these DMT operations won’t help. It’s the worst of the worst.”

Nemec went on to explain some of the horrifying videos she’s seen of dogs hung and beaten to death, dogs and cats skinned alive, boiled alive, or burned alive before they’re finally butchered for consumption.

“We’re often told it’s their culture, and we can’t change their culture,” Nemec added. “Torture is not cultural. Hanging, beating, skinning, or boiling a dog or cat alive is not right in anyone’s culture. Wrong is wrong.”

“As repulsive as it is to us here in America to even imagine eating a dog or a cat, it is important to remember that is exactly what we’re doing with pigs, chickens, and beef here,” Nemec, who also devotes her time to a local farm sanctuary, said. “So when the finger is pointed at them, they’re actually pointing the finger right back as us.”

“The work we’re doing is just a drop in the bucket,” Nemec said. “People often ask what they can do to help? You can donate, yes, but we can’t really help until we look at ourselves and our own practices regarding livestock. Otherwise, we’re just being hypocritical and spinning our wheels.”

“We can’t rescue our way out of this,” Nemec added. “It’s a great feeling to rescue and help dogs and cats, but we have to go much deeper to make a real change. It’s the power of ignorance vs. the power of education. We must continue to bring awareness and education to these causes.”

Thankfully it’s the younger generation in South Korea who is making the biggest difference, Nemec stated. She added that hopefully, in another generation or two, this practice should burn itself out for the most part. Nemec said it’s dying a slow death, and the trend of consuming dog and cat meat is steadily declining. But she’s not naïve to believe it will ever be completely extinguished.

Nemec said many rescue groups and advocates in the U.S. have embraced the DMT rescue cause. She said it started more aggressively on the west coast, and some east coast rescue organizations began getting involved. But, she added, organizations like RSR in Minneapolis and organizations in Denver were right in the mix.

“Rescue has no borders, and compassion has no limits,” Nemec concluded. “Animals have no voice. So everyone will continue to hear mine.”