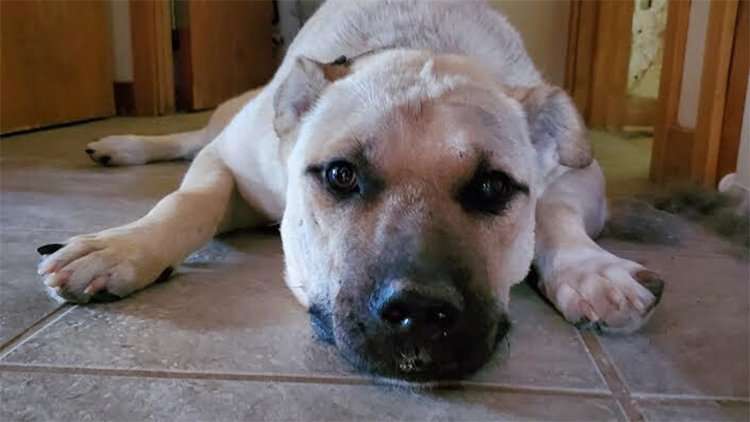 From the hellish life he was rescued from, he had every right to not trust anyone. But that isn’t the dog Canyon was or is. Instead, he looked forward to a better life and he now plays the role of the rescuer.

Canyon was rescued from a Reservation where it’s suspected he was used as a bait dog to train fighting dogs. When he was taken to safety, he had plastic piping around his neck and his face was full of porcupine quills.

“He was a mess when he arrived,” said foster Breanna Jensen. “It appears he was being used as a bait dog. He had a black plastic pipe around his neck, but it wasn’t being used to protect him, it was actually being used to cover a severe, untreated laceration under his neck, so they could continue using him.”

Jensen said it was heartbreaking. In addition to that, his face and muzzle were full of porcupine quills, some were very deep. Jensen said Canyon endured five surgeries after arriving at Ruff Start Rescue (RSR) to remove the quills and help heal his injures.

Jensen first saw Canyon on another organization’s website that rescues dogs directly from the Reservation. She said the moment she saw Canyon’s picture she knew she had to have him. But Canyon was not scheduled to be transferred to RSR, he was actually slotted to go to another organization.

“I alerted the (RSR) team who works with transferring rez (Reservation) dogs and told them I had to have him, please make it happen,” Jensen said. “They worked with that group and they did make it happen.”

However, Jensen confessed when Canyon finally arrived she was terrified of him. “He has the most intimidating, piercing brown eyes. When he looks at you, he looks right through you, straight into your soul. It was frightening and I was actually afraid of him.”

But Jensen got herself past ‘the look’ and didn’t give up on him. “He was put through the wringer,” she said. “I don’t know how he could even trust a human after how he was treated and abused. It was amazing how kind, sweet, and gentle he was. He just wanted to be loved.”

Jensen has been a foster for just about two years and to date has fostered 20+ dogs. So far, she’s adopted two of those dogs herself. She had Canyon in her care for two months while he healed and was acclimated to a better life.

“The day he went online for adoption I received three applications,” Jensen reported. “One of the three impacted me more than the others.”

“The moment I saw Canyon posted on the RSR website, with his muzzle still swollen and those beautiful, hollow, brown eyes, I was attracted to him,” Reyes said. “I started the adoption application process immediately.”

Jensen said she worked with Reyes through the transition and made it very clear that he still needed medical attention and there would be some additional costs with that. But that wasn’t a deal-breaker, especially after Reyes and Canyon met for the first time.

“When I met Christine and introduced her to Canyon he was immediately attracted to her,” Jensen said. “He just melted to her side. And even when we left, he wanted to stay with her.”

They completed the adoption process and shortly thereafter, Canyon went to his forever home with Reyes.

“I’ve had him for just about a month now,” Reyes reported. “He’s doing really well. We also have a rescue Yorkie and two cats, and Canyon has been wonderful with all of them. He’s a giant (90 lbs) teddy bear who made himself right at home and molded himself into our family.”

“I work in social services,” Reyes concluded. “I have some really bad days at work with some of the things I have to deal with, and some days when I come home all I can do is sit on the couch for a few minutes and cry it out. Canyon comes to me immediately and puts his big hippo head on my lap. He knows, and he doesn’t let me be alone. I’m so grateful for him. He rescues me.”

The essence of Ruff Start’s mission is to save animals and help people who love them. There are more Canyons out in the world that we need to rescue and more Christine’s that need the unconditional love of an animal. If it’s within your means, please donate to help us continue this life-saving work! We can’t save them without you.