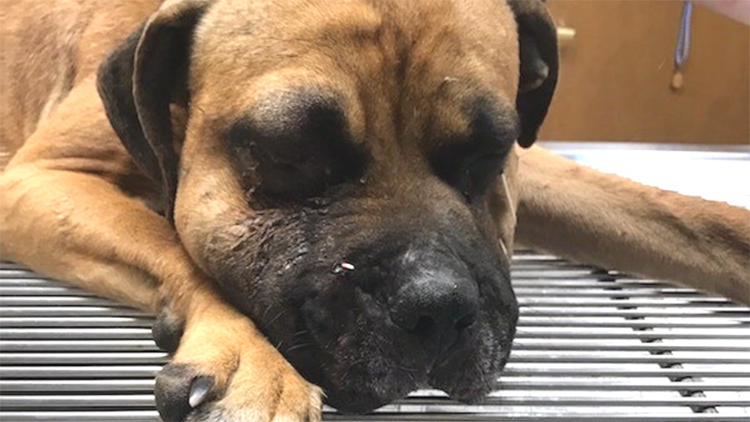 Quills infected his mouth, causing his neck to swell. At the same time, months of neglect made Kobe critically underweight and unloved.

He was saved just in time.

Before Kobe could enter the Rescue, he needed a few days to gain strength as vital medication and fluids worked into his system. He was at least 20 pounds underweight and barely hanging on as porcupine quills migrated further into his body. His vision blurred, but his will to live didn’t.

Thankfully, Kobe could make the hours-long trip to Ruff Start within a few days of being rescued.

Who knows when the last time is that Kobe felt safe and loved?

Kobe immediately dragged his aching bones onto one of the many beds his foster family provided for him his first night there. He could finally rest, and indoors no less. Kobe needed months to heal, physically and emotionally. The Ruff Start community was ready to do whatever it takes to get him the care and support he needed.

Shortly after Kobe settled into his foster home, he underwent surgery to remove the embedded quills and infection from his face, and that was just the beginning. His foster family needed to follow a strict feeding schedule for him to safely gain weight while Ruff Start’s medical team watched him diligently to ensure that migrating quills didn’t damage his eyes.

Kobe made significant progress in his foster home. The surgery and medication worked very well, and he recovered in record time. Kobe gained over 20 pounds toward the end of his recovery.

A few months and a lot of love later.

Kobe is a different dog.

Kobe bonded with RSR alum Kaya in his new forever home. His endurance is continually building, although bouts of infection interrupt his progress occasionally. You may have guessed this, but Kobe loves to eat!

According to his new owner, Kobe stole a pork chop, a loaf of bread, a bag of tortillas, and a package of muffins all in one day. Despite their efforts to place human food higher, Kobe managed to lengthen his body just enough to perfect counter surfing (we think he’s earned it).

Kobe also thinks his new 60+-pound frame is perfectly suitable as a lap dog. As his owner says, Kobe loves to eat, sleep, play, and repeat! Kobe’s well on his way to living the happy and healthy life he deserves.

Kobe’s transformation wouldn’t have been possible without Ruff Start’s community of fosters, volunteers, adopters, and supporters. At-risk animals like Kobe are always in need of help. We’re doing whatever it takes to answer their plea, giving them a second chance at a happy and loved life. You can be a part of this life-saving effort by donating! Every dollar makes a difference.

← Ruff Start Rescue Transport Ride Along: October 24
Give to the Max Day 2020 Toolkit →