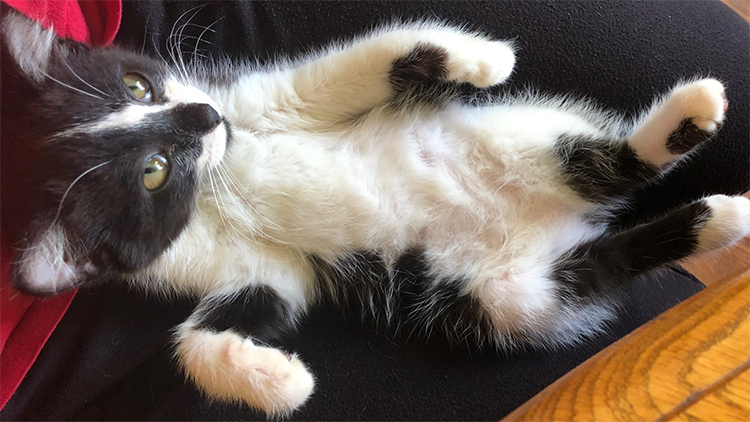 Botflies: What You Need to Know

Fluffy little kittens are attractive and irresistible. But they’re not only irresistible to us, these cute little fur balls make easy hosts for nasty insects such as botflies. Botflies are abundant and common here in Minnesota and find small animals to use as unsuspecting hosts for their larvae to begin their life-cycle.

A botfly, also known as a cuterebra fly, warble fly or gadfly, uses a live animal such as a kitten, squirrel or a rabbit as a host for part of its lifecycle. How that occurs is a bit unsettling. The adult botfly captures a blood-sucking insect, like a mosquito, and lays its eggs on their bodies. Those egg-covered insects then spread the botfly eggs onto the fur or into the skin of the animals they bite. Larvae then grow from the eggs and burrow into the host animal through that bite opening, or the larvae can enter the body through the animal’s nose, eyes or mouth. Once the parasite is under the host’s skin it forms a cocoon, and to survive the larvae eats the animal’s flesh and forms a small open hole that can be seen from the outside on its host. The larvae continues to grow inside the skin cocoon for a few weeks until it reaches maturity, when it then crawls out leaving an open sore on the host animal. Although unappealing, the effects of a botfly infection doesn’t typically kill the host, and the sore where the larvae’s cocoon was eventually heals.

According to Ruff Start Rescue Veterinarian Dr. Hillary McCulloh, she typically sees botfly cases in August through early September, although occasionally as early as late July.

“In our area, I typically see cuterebra cases in kittens,” McCulloh said. “Treatment involves removing the larvae and in most cases treating with antibiotics. Depending on the size of the resulting wound, some wound care management may be necessary as well.”

McCulloh went on to say that the prognosis is usually good for the host animals. She said that sometimes the larvae can be difficult to find, but once located, removed and treated, the kittens heal well.

Such is the case with Pepper. Pepper was brought to Ruff Start Rescue (RSR) after she was found outside a farm home by a field near Stacey, MN.

Pepper is being fostered by Jolene Tourville, who is also a veterinarian, and who noticed Pepper’s botfly infection immediately.

“Most people think these botfly holes look like fight wounds,” Tourville said. “But if you look hard enough you see something moving and then you know what it is.”

Tourville said this is common with kittens who live outdoors. She reiterated what McCulloh said about removing the larvae, cleaning the wound and treating with antibiotics.

“Pepper was pretty sick when I got her,” Tourville, who has been a RSR foster for about nine years, said. “She was host to four botfly larvae and one was really large. And, she also had some ticks.”

Tourville is happy to report, however, that since Pepper was found and treated, except for some minor scaring, she’s healed up nicely, growing fast and is a rambunctious little kitten waiting to go to her forever home.