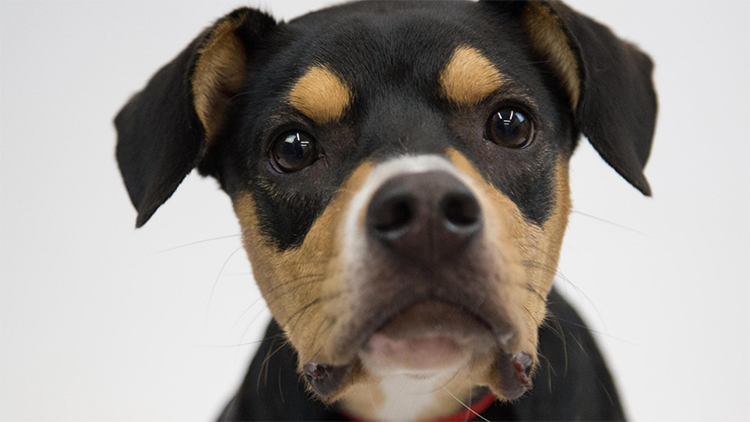 Felix had his ticket punched and was cleared for his transport from Houston, TX, to Princeton, MN. It was the end of March and it was going to be a new beginning in a new place for him.  But then he developed a cough. Precaution processes were followed and Lindsey Maresh, who had been fostering Felix in Houston, took him to the veterinarian to have him checked out.

“I had him for about two weeks,” Maresh said. “He was a typical puppy. He was playful and we were working on potty training, crate training, leash training, all the things he was ready to learn.”

Maresh was also preparing for a trip out of town and was working to secure a temp-foster for Felix when his cough developed. Thinking it was a case of kennel cough, she took Felix to the veterinarian to have him checked out and was sent home with some medicine.

Maresh took Felix and his medicine to the temp-foster on a Wednesday and left on her trip. However, just three days later, Felix was at the emergency veterinary clinic. After landing at the airport on Saturday, Maresh didn’t even go home first, she went straight to the clinic where Felix was.

“His breathing was so bad,” Maresh explained. “They ran several tests and had him on oxygen.”

Maresh said poor little Felix was diagnosed with “everything”. She said he had Distemper (a contagious viral disease that affects respiratory, gastrointestinal and the central nervous system), K9 Adenovirus (CAV-1: liver infection), and K9 Coronavirus (CCoV: intestinal infection). But, Maresh said luckily he did not have “parvo” (K9 Parvovirus (CPV-2): A widely-spread infection that affects the gastrointestinal system, lymph tissue, and bone marrow).

“Felix was in the veterinary ER clinic for about two weeks before I was finally able to take him home,” Maresh said. “By then he was acting normal but was still coughing a bit.”

Fosters typically have rescues for only 10-14 days before they go to their forever home. But in Felix’s case, Maresh now had Felix for the better part of five weeks. Because of her travel schedule, Felix was transitioned to another foster in Houston for the last few weeks of his recovery.

Felix was part of Ruff Start Rescue’s foster-to-adopt (FTA) Program. FTA was implemented about two years ago, and according to FTA Placement Coordinator Lindsey Monroe, “The program has become huge.”

How the program works, Monroe explained, is that dogs rescued in Texas are put into foster homes there while they’re made available for adoption in Minnesota. Then, when they’re transported to Minnesota, they’re delivered right into the hands of their adopter. “It’s one less step in the process and one less stop for the dogs,” Monroe said.

While the rescued dogs are being fostered in Texas, pictures and biography descriptions of them are posted and potential adopters can apply for them. Monroe said the goal of the FTA Program is to have the dogs adopted before they even arrive in Minnesota.

“The success of this program takes a whole team of people,” Monroe said. “From the fosters to the adoption coordinators and those who facilitate the vetting process, to the bio writers and the social media and web support folks, it’s a process that takes a lot of work from a lot of people.”

Monroe said the FTA Program started with just five dogs on the roster and now there are between 25-35 dogs, twice a month.

Under the current circumstances, the potential adopters complete their adoption program interviews and training virtually. Once that is complete and successful, and when their new four-legged family member is about a week away from transport and arrival, the adopters are contacted as to when and where they can meet their new pet.

Since this is the first-time in-person meeting and the dogs are released directly to the adopters, the adopters and dogs are given 10 days to acquaint and ensure that they are a good fit for one another.

Monroe reiterated that Felix was originally scheduled for a March transport but was pulled due to his unexpected health set-back. Due to his on-going condition, Felix’s transport date kept getting pushed back. He was finally cleared for transport on July 9 and arrived in Minnesota on July 11.

“Felix was actually rescued in March and adopted in April,” Monroe said. “I kept in touch with his adopter, Malori (Paplow), and we put her in touch with his foster, Lindsey (Maresh), in Texas. Thankfully Malori was understanding and patient. It was amazing that she kept waiting and remained willing to adopt Felix. Malori and Lindsey developed a relationship focused on Felix’s recovery and that really helped.”

Monroe was quick to offer a grateful shout-out to Maresh, too, who went above-and-beyond and continued to provide Felix with a comfortable, loving home while he recovered. Maresh has been associated with fostering rescued animals since she was a child. She said she was raised in a family that fostered, and except for a few years she was on her own, she’s always fostered. She fostered over 20 animals just last year.

Monroe also acknowledged RSR Large Dog Foster Manager McKenna Lorenz who took over Felix’s case after he arrived in Minnesota, just in case anything went wrong. But luckily it didn’t and although it took him nearly four months to get to Minnesota, he arrived safely.

Felix now has a happy home with Paplow and she said despite the extended foster process and his turbulent health adventures, he is a happy, rambunctious, active young dog and is doing really well. She said he still has a little bit of a “click” in his breathing but it doesn’t seem to affect his demeanor or his personality.

“We’ve taken him paddleboarding and rollerblading,” Paplow said, “and he likes to go on walks, runs, and hiking with us. He also has a little kitty brother who he loves very much.”

Paplow was quick to say that all of the credit for Felix’s successful recovery and safe arrival goes to the Maresh and to the RSR organization.

“I didn’t do any of the hard work,” Paplow said. “I can’t thank the fosters and Ruff Start Rescue enough. They are the ones who made this happen.”

Paplow said the four months it took for Felix’s arrival really didn’t seem that long because of the wonderful communication job that Maresh and Monroe did. “They kept me updated and communicated with me regularly, and I am so thankful for that.”

Maresh is also happy this adventure has a happy ending and added, “Dealing with Ruff Start Rescue is fantastic. It’s been great seeing what this organization does and how they do it. It seems like they always have a plan in place and work together to achieve a goal.”

Speaking for Felix, he agrees and is happy that no one gave up on him; not Maresh, not Monroe, not Ruff Start Rescue, and especially not Paplow.

Check out Felix’s story on the Best Friends blog

← Share your story to help us save more lives!
Botflies: What You Need to Know →