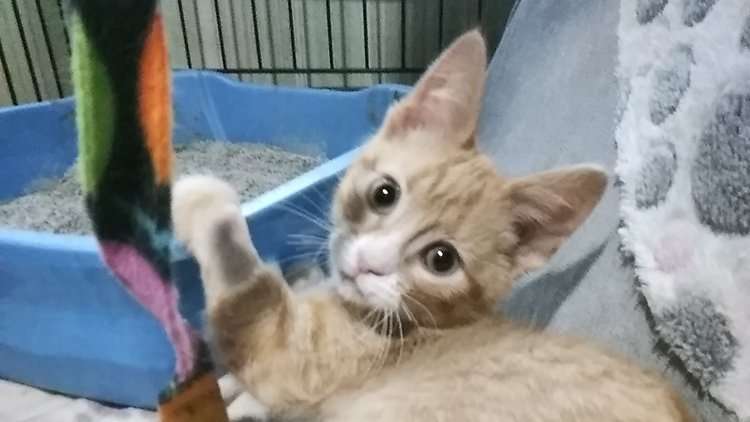 Kindness Goes a Long Way: The Story of S.T. Nubbs

“Can you help?” asked the good Samaritan, holding a small orange tabby, clutching gently to keep the cat from wiggling out of her arms. “I found him on the side of the road, and I think he may have been hit by a car.”

Luckily, Alexia – a certified veterinary technician – was working at the emergency vet clinic that evening. As both a foster and Vet Tech for Ruff Start Rescue when she wasn’t at the ER, she was hopeful she could give the little kitten a fighting chance – but first, she needed to assess his condition to see exactly what she was dealing with.

The little kitten, probably around 10 weeks old, had decent vital signs. It was clear, however, he was dehydrated and in quite a bit of pain. After unwrapping the towel that surrounded the young cat, Alexia discovered two things: he had some mild abrasions, consistent with road rash, and his tail was a long, stringy, blackened strip. What once had probably been a lively tail full of soft ginger fluff was now entirely hairless. The skin and fur had been completely peeled back, exposing the muscles and tendons beneath.

Alexia and her fellow coworkers quickly got the friendly kitten hooked up to some IV fluids, rehydrating his tired body. They also began pain management and antibiotic medications to stabilize him and bring down his pain level. From there, the next portion of this little cat’s journey began: figuring out who would provide him the rest of the care he needed to survive.

Despite everything he’d been through, the orange kitten was still in good spirits. Purring continually and rubbing up on the staff assessing him, Alexia knew this little cat deserved a chance. She contacted her coworker, Erica – Ruff Start’s Senior Medical Manager – and asked for permission to take him into rescue as a foster.

After a brief chat about the kitten’s medical needs, it was official: Sir Thomas Nubbs was being given a new life, courtesy of Ruff Start.

While the care Sir Thomas Nubbs was given at the emergency clinic stabilized him and provided him a good start on the road to recovery, he still had some pit stops to make on his way to being 100% healthy. After an assessment, it was decided that Nubbs would have surgery to completely remove his degloved tail, giving him the little nubbin that would soon become his namesake.

After the little kitten pulled through surgery, Alexia was cautiously optimistic that Nubbs’ hardships would be over – but there was a reason she was wary of celebrating too early. With any tail injury, there is always a risk of nerve damage that can extend all the way up to the rest of the body and cause issues with defecation and urination. Alexia waited patiently to ensure Nubbs would use his litterbox throughout the weekend, fully acknowledging how silly it probably seemed to be wishing so adamantly to clean up poop.

Luckily, Nubbs recovered. He used his litterbox continuously and made himself wholly comfortable in Alexia’s home. After he had been medically cleared, her children would swoop him up and carry him throughout the house on his back as he purred his affections for them loud enough it sounded like a freight train was passing by outside. He would roll on his back, exposing his belly, and then curl up with what looked like a smile on his face as he slept peacefully.

This, after all, had been his disposition since the day Alexia first met him. She had seen his potential from the moment he was presented to the emergency vet. Despite all the things he’d been through, he was still a young kitten, eager to live.

Sir Thomas Nubbs was sent to one of our adoption partners to find a family of his own and was promptly adopted. His story, which could have ended tragically, ended on the happiest note possible – all because of the kindness of one person who thought they could make a difference for a small creature in need.

← Online auction items needed!
Share your story to help us save more lives! →