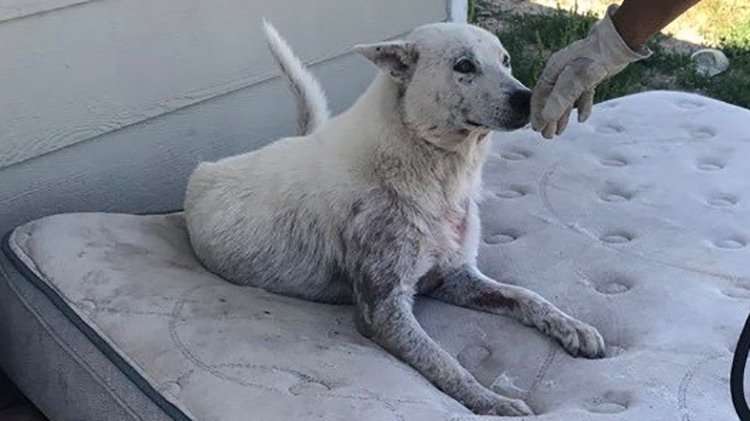 To the untrained eye, Maicoh was no different than so many of the other dogs that run free on the Reservation “rez” in western South Dakota. At the beginning of July, he found himself wandering the open plains and rolling hills in search of something. Water, shelter, food. Anything. He’d truly take anything at this point. The only stipulation? Whatever he found needed to be good.

He found something that would make due on the porch of an abandoned house: a mattress. It was white – or, at least, was at one point. It was now dirtied from the elements, much like himself. Exhausted from his seemingly endless search, he laid his severely mangy body on the mattress’s soft padding and settled in. For how long? He didn’t know.

Until something touched him! A hand. A human hand. He raised his head to look at the volunteer who was offering a gloved hand in his direction. After a quick survey of the world around him, he nudged that hand in a friendly gesture of goodwill. Although he didn’t know how exactly, he knew he had finally found what he was looking for: something good.

After being found on the rez, Maicoh was transferred to Ruff Start Rescue, and subsequently into the care of Rhonda, his new foster mom. He arrived in her home on July 12, a Sunday, and her first thought was something along the lines of “this poor dog”.

Maicoh’s fur had not started to grow back yet from the mange he contracted while on the run. In fact, he now had a skin infection, and was dreadfully, uncomfortably itchy as a result. Open sores covered his body, accompanied by severe scabbing, and most of his fur was gone. He had lost so much of his hair that Rhonda distinctly remembered him looking more pink than white in color.

On top of his adverse skin condition, Maicoh was understandably nervous. Still friendly, of course; he knew these people, as strange as they were, intended to do good. But he had never been taken care of before by anyone kind, and as a result didn’t know how to communicate with them. He was very resigned and somewhat scared. Rhonda also noted that he was just so tired. Exhausted, as though he had lived multiple lives in his short one and a half years of living.

It was hard to really get to know Maicoh at first. He was somewhat machine-like in nature: he would eat and then just rest more than anything else. He never fell into a truly deep sleep, though; his body was always tense, like he was anticipating a new threat at any time. By nature, he was sweet, tolerant, and very gentle. But the rules were always different on the rez.

Maicoh was deliberately kept separate from his foster’s resident animals at first. He crashed in her daughter’s room, a quiet and comfortable place designed to make him feel safe on whatever timeline he deemed appropriate. On his second night in Rhonda’s home he climbed up into her daughter’s bed to sleep. After that, he decided he needed to be with her always. She became his shield: his designated armor, protecting him from the unknown.

Once he chose her, he slept deeply and peacefully for the first time in perhaps his whole life.

A week passed in Rhonda’s home and Maicoh began acting like a real dog. The combination of being able to eat a healthy, consistent diet, receiving the appropriate medications to quell his itching and mend his skin infection, and being able to sleep soundly and frequently was working. He had begun to heal, both physically and emotionally. The transformation was beginning.

The sores that used to cover Maicoh’s body had scabbed over and begun to flake from his frame. He began to love being touched, often giving his own version of hugs by putting his whole weight on his human friends in the form of a full-body lean. He continued to choose his favorite people, hopping up next to them and tucking his head into their chests lovingly. It seemed to be his version of expressing the gratitude he felt in being so wholly rescued.

His hair had started to grow back.

When Maicoh first found rescue, he had been waiting for something good. Now, although so much in his life has changed for the better, he is still just waiting. For a few things, actually.

First, he is waiting for the all-clear from our veterinary team regarding his skin issues. His care is constant and consistent and, most importantly, working. Thanks to donations that allow Ruff Start’s team the power to provide him with excellent care, he is healing – in more ways than one.

Second, he is waiting for his forever home to find him. He has a few prospects currently, and they’re good, but it’ll take a special family to truly win his heart. For now, he is happy to enjoy life with his constant companion, Rhonda’s daughter. She really is the best at fetch, after all.

And last, right now, Maicoh is probably waiting patiently to go on a walk. According to Rhonda, he absolutely loves walks and runs. Except this time, he has a destination in mind when he’s done walking. It’s good, too. It’s not an old, dirty mattress on an abandoned porch. Now, he actually has a place to be. Now, he has a home.

Animals like Maicoh need us. He was one of the lucky ones – one of over 1,800 animals we’ve had the pleasure of saving so far this year. But there are more just like him out there, and we can’t save them without your help.

Every part of rescue matters for animals like Maicoh. From the volunteers who help bring them into rescue to the donors who fund their veterinary expenses, each person involved paves the way for these animals to find their forever homes. However you choose to give, you’re an integral part of each and every Ruff Start rescue mission.

Today, you can save a life – so don’t delay.

Please, help us do whatever it takes.

← A Transformation You Need to See to Believe
Adopter Coupons →