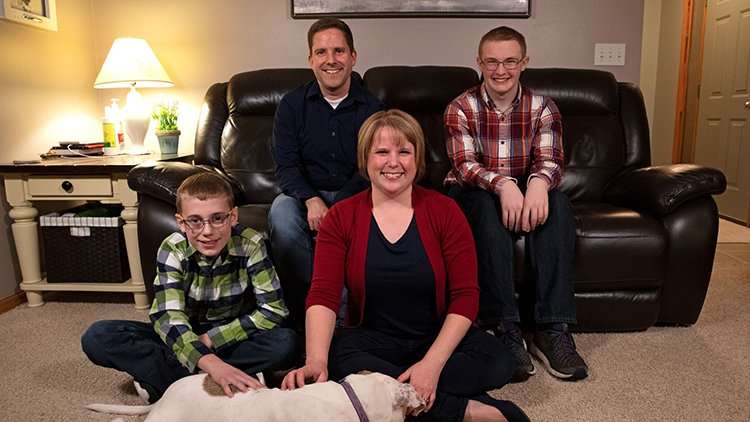 How is it that a rescued dog can play an important role in the health and happiness of a home?

Just ask the Kari and Patrick Cummings family of Crystal. They know the power of unconditional love.

While they know all about the challenges and joys of adopting children, they have also become familiar with the value of an adopted pet and how animals can play an important part in strengthening a family unit.

Kari and Patrick adopted Caleb, who is known as CJ, at birth more than 10 years ago and still stay in touch with his birth parents.

But they decided they weren’t finished.

The couple adopted another Caleb, 16-year-old Caleb McMurray, in August 2018, with the final papers being completed in April 2019.

But again, the family wasn’t finished.

The newest Caleb to the household said that he grew up with dogs, loving every one of them.

He lobbied hard for adding a dog to the family.

“I guess I kind of sparked the idea of adopting a dog, cuz I love dogs … it kind of sucked not having a dog after growing up with dogs my entire life,” Caleb said.

As he and CJ lay on the floor petting, playing and lavishing their love on the newest member of the family, a mixed breed female named Sadie, one can see that the newest addition is a great fit.

“I’m pretty sure on the day we met [Caleb] he was talking about a dog,” Kari said.

To complete the family with a puppy, she began searching the internet.

What Kari discovered when starting her search is that Ruff Start has saved more than 11,500 animals, taking in an average of 200 animals per month.

After they started looking through pages of dogs on the Ruff Start Facebook page, they came across Sadie’s profile.

“I was like, ‘oh my goodness, this dog is adorable’ and I showed everybody and kept showing them until one day we’re like, ‘let just do it,’” Kari said.

Sadie was found wandering the streets of Houston, Texas, rescued and brought north by Ruff Start.

The organization, which doesn’t have the traditional brick and mortar facilities, regularly brings animals north for adoption and uses volunteers to house the dogs until they are adopted.

Davis has come to understand the effects pets can have on families and how a pet can help people overcome many challenges in life, including those suffering from PTSD, the elderly living in senior homes and others challenged by trauma.

She sees the extra special human-animal bond with adopted pets being adopted by families with adopted children.

“The connection between an adopted pet and an adopted child is something really special. The child can relate to that animal on so many levels and really give them a sense of security, belonging, and feelings of being understood.

They have both been through major life changes and are learning a new life where they are very loved, together,” she added.

“Everybody needs somebody who loves them unconditionally, and no other animal loves you like a dog,” Kari said about the decision to adopt Sadie.

“There is a special feeling knowing that your pet may have had a rough beginning, but now has a loving home,” Kari added, understanding that the connection between the children’s and the dog’s life experiences could be an invisible, but important tie.

There’s nobody happier about the decision than the two boys.

When the boys come home from school, Sadie is the first to greet them at the door. Their connections and interactions also help the boys learn responsibility.

“Caleb feels nothing but joy, interacting with Sadie,” Kari said. “Being a caregiver is a different role for Caleb, and I think he likes to know that Sadie relies on him to keep her safe.”

CJ, who is on the autism spectrum, has also been affected deeply by the addition of Sadie to the family.

“She always runs after me when I run away from her,” he said in describing how he likes to interact with Sadie.

Caleb, according to Kari, is more of the cuddling type.

While the success of adding Sadie to the Crystal family is obvious, Davis said it takes the coordination of hundreds of volunteers to make adoption a reality for those seeking a new pet.

The Cummings family demonstrates it can be even better when families with adopted children take the step.

Studies also show the benefits. According to the National Council for Adoption, animals “can aid a child in forming attachments, feelings of security, psychotherapy processes, and opening up, as well as providing feelings of being understood and accepted … pet ‘adoption’ can provide a parallel experience that can help adopted children learn about their own experience and identity.”