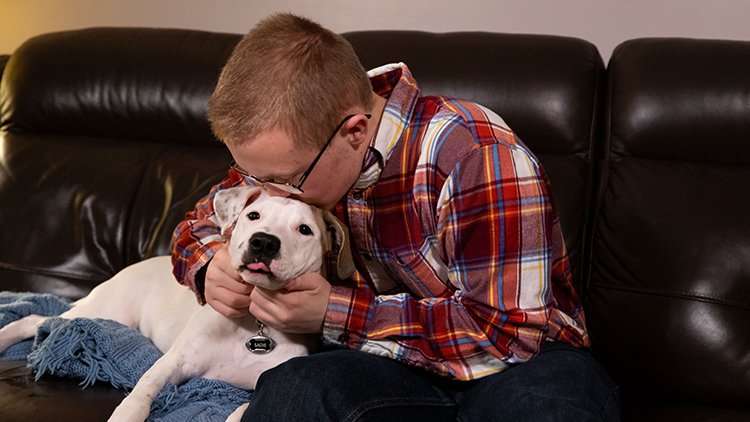 Ruff Start Rescue considers all pet adoptions to be a mutually beneficial relationship between people and animals. However, recently the organization has seen an increase in an extra special human-animal bond; adopted pets being adopted by families with adopted children. Executive Director and Founder of Ruff Start Rescue, Azure Davis says, “The connection between an adopted pet and adopted child is something really special. The child can relate to that animal on so many levels and really give them a sense of security, belonging, and feelings of being understood. They have both been through major life changes and are learning a new life where they are very loved, together.”

A Minnesota couple, Kari and Patrick, have witnessed this positive connection with their own adopted sons, Caleb and CJ, after bringing home a rescue pet from Ruff Start Rescue into their family. They adopted their younger son, CJ, at birth and realized that their family wasn’t yet complete. They quickly learned that only 5% of teens would be adopted into forever families which solidified their decision in adopting a teenager. They met their 16-year-old son, Caleb, in August of 2018 and his adoption was finalized in April of this year. From the day they met him his biggest hope was to have a dog of his very own. Kari and Patrick felt that a dog would be a huge benefit to Caleb because, “Everybody needs somebody who loves them unconditionally, and no other animal loves you like a dog,” says Kari.

“Everybody needs somebody who loves them unconditionally, and no other animal loves you like a dog.”

When Caleb’s parents started talking about adding a dog to their family, they knew right away that they wanted a rescue dog. It just made sense to them, Kari says. “There is a special feeling knowing that your pet may have had a rough beginning, but now has a loving home.” Sadie was found roaming the streets of Texas. She was rescued from a high-kill shelter by Ruff Start Rescue and came to MN.

This October, Kari and Patrick adopted Sadie, a Lab/Great Dane mix from Ruff Start Rescue, and they have already seen the positive impact Sadie has had on Caleb and CJ. Caleb and Sadie instantly took a liking to one another, and Caleb is Sadie’s favorite family member. He’s the one Sadie prefers to play and wrestle with. “He loves to smother her with affection, and she just eats it up,” says Kari. Caleb is thrilled that Sadie runs to greet him when he gets home and now spends less time on video games in favor of time with Sadie. With Sadie, Caleb is able to give and receive affection easily, which can be hard for a teen. “Caleb feels nothing but joy, interacting with Sadie,” says Kari. Sadie is also helping Caleb learn responsibility. “Being a caregiver is a different role for Caleb, and I think he likes to know that Sadie relies on him to keep her safe.”

Kari and Patrick’s younger son, CJ, is on the autism spectrum. Sadie provides a nonjudgmental sounding board for CJ and he doesn’t need to worry about whether he is saying the right things. “She enjoys him just as he is and that is a gift.” shares Kari. Plus, Sadie makes a wonderful impromptu weighted blanket; CJ loves the weight and pressure of Sadie next to him. Kari and Patrick believe Caleb and CJ have special bonds with Sadie because they can relate to her situation—being adopted into the family, just like they were.

“She enjoys him just as he is and that is a gift.”

The National Council for Adoption article Therapy Animals for Adopted Children (2016) reminds us that animals “can aid a child in forming attachments, feelings of security, psychotherapy processes, and opening up, as well as providing feelings of being understood and accepted – all supports that can be especially important for children who have been adopted. Further, pet “adoption” can provide a parallel experience that can help adopted children learn about their own experience and identity.”