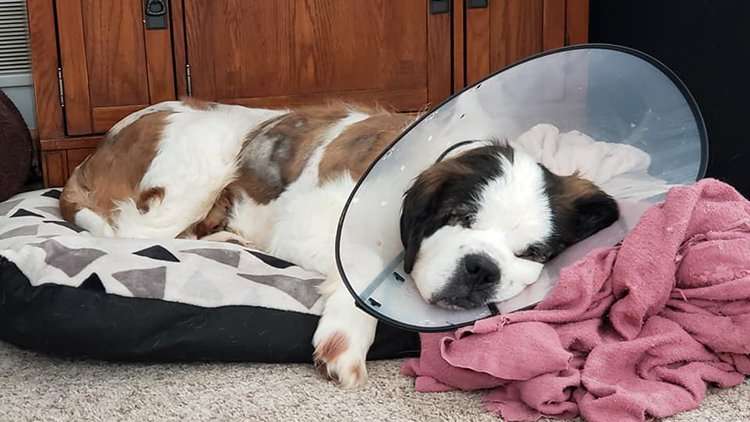 While I tend to hate small talk about the weather, it’s hard not to discuss what’s going on outside right now. Each week, it seems, snow is building up and clogging main roadways, wind is causing white-out conditions, and cold snaps make going outdoors for more than a quick puppy potty break seem unbearable. Even as I write this, snow is falling and I’m already growing nervous about my drive home at the end of a hard work day.

Wintry conditions make life difficult for animals and people alike, and it’s an exceptionally difficult time to be an animal rescuer. People who are looking for lost pets pray their animals won’t succumb to the elements, animals who live outdoors showcase signs of hypothermia and decline as temps drop, household pets struggle with ‘cabin fever’, and we all wish for the warmth of the sun. In times of such frustration and personal strife, I lean on the story of Old Lady the St. Bernard to bring hope and light to dark, snowy days.

If you haven’t heard Old Lady’s story yet, I’d honestly be a bit surprised. The 10-year-old St. Bernard came to Ruff Start Rescue after being saved from a puppy mill, where – for the entirety of her life – she was kept in a barn with little-to-no human contact. Forced to birth litter upon litter of highly sought after puppies, Old Lady was only given up to rescue when she proved no longer useful to the breeder who kept her in such horrific conditions. The day she came into rescue, she had been freshly shaved on large portions of her body and was so shy she would tremble at small movements. We knew right away she would be a special dog but had no idea how much sadness and pain she had yet to endure on her road to recovery.

As a result of how neglected she was, the second her paws hit some newly-fallen snow on the pavement, she spooked. The sound of the crunch frightened her so much that she ran for her life, causing her foster – who was diligently holding onto her leash – to fall and be dragged before letting go of the leash. Old Lady disappeared into the woods of the Sherburne Wildlife Refuge, leash still attached and dragging.

After 17 days of sporadic sightings, brutally cold temperatures, and multiple attempts to lure her with humane live traps, Old Lady was found by a few people hiking a trail not far from where she disappeared. Her leash had been entangled on a branch while she ran and hid away and, by some sort of miracle, the branch had gotten caught in a heavily wooded area she was attempting to hid in. We partnered with The Retrievers to get her back into the safety of our facility after an hours-long, intensive rescue mission.

Featured on The Dodo, People.com, and in both local and international publications, her tale of perseverance and survival quickly became a worldwide phenomenon. Old Lady inspired animal lovers everywhere with her strength and ability to fight for the good life she so rightly deserved and helped raise awareness of the healing powers of hope and love.

While it’s easy to say that Old Lady is a living example of a modern fairytale, her story didn’t tie up quite so nicely in a bow as the papers may have led you to believe. The process of rehabilitation for a neglected animal is long for both animal and human. Puppy mill and hoarding situation survivors especially are almost permanently scarred by their past, either physically or emotionally, and Old Lady is unfortunately no exception.

We didn’t know what we were signing up for when we initially said we’d take Old Lady in. We knew that; the rescue is lucky to have amazing fosters who agree to take in these animals regardless of their backgrounds and promise to rehabilitate the best they can. We know high stakes problems like medical and behavioral issues are possible, and we take a risk when we agree to take in an animal whether their history is known or not.

In the case of Old Lady, we’re continuing to learn more about the care she needs to become the best version of herself at 10 years young. To this point, she’s received some of the best care we can provide from both our partner vet clinics as well as her new mom, a Retrievers volunteer who has valuable experience with both St. Bernards and puppy mill dogs and assisted in her high stakes rescue. But her laundry list of issues is still there.

We initially weren’t going to spay Old Lady due to her age and the fact that surgery could be risky, but after several veterinary assessments, we were assured that she could undergo the procedure safely. Since she needed 9 teeth (including all 4 canines) removed anyway and she was healthy enough, she was spayed, effectively ending the possibility that she could be used for breeding purposes again. She also underwent entropion surgery – an eyelid surgery that fixed a persistently bothersome eye problem where her eyelids ‘rolled’ inward and continually scratched/irritated her eyes. She was brought up to date on vaccines, too. To top it all off, during one of her veterinary appointments, it was discovered she had a mammary tumor which was then removed. After days of anxious anticipation for the results, we are happy to report that the tumor was found to be benign and did not show signs of cancer.

To date, Old Lady the St. Bernard has cost the rescue over $1,000. Despite her celebrity status and ability to capture the hearts of millions, only $200 has been directly donated to her care – leaving quite the deficit for our small but mighty rescue.

While we know she is worth it, we need your help to get Old Lady – now known as Tesha – entirely healthy so her fairytale can complete. Can you help contribute to her rags-to-riches story and allow her to truly live for the first time?

To stay connected with Tesha, visit her Facebook page run by her mom, Carolyn! It’s full of heartwarming updates, including photos and videos of Tesha learning how to be a dog… who is finally loved and respected. You can find her online at https://www.facebook.com/oldladybernard/.