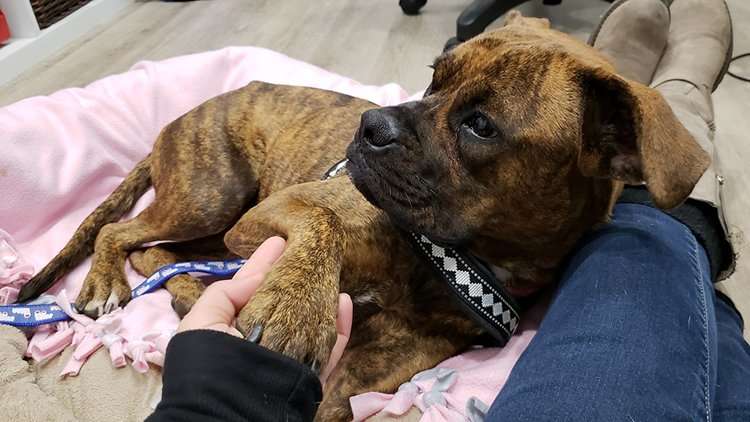 A Trip to Houston, A Commitment to Change

For many years, I’ve heard talk of dog overpopulation in the southern United States. I’ve seen pleas and sad photos of animals in need come through my emails. I’m embarrassed to admit that after over 8 years in the rescue world, I thought I understood what it all meant. I thought Ruff Start Rescue was helping in the best way we could by taking a van load full of roughly 20 dogs from our Houston shelter partner, Harris County Animal Shelter, each month and finding them wonderful forever homes in Minnesota.

However, on Thursday, September 6, I began my journey to realize the hard truth: we weren’t doing enough. Nobody was. Nobody is. This is an epidemic.

Julie Lessard (RSR’s Director of Programs), Lexi Johnson (RSR’s Intake Manager), and I flew to Houston, Texas, that Thursday. We were there for five long days. In that time, we toured many overcrowded shelters, visited known public animal dumping grounds, and met with countless animal lovers who are advocating for change in their communities and around the country. My eyes were opened to this devastating problem and how it exists on a day-to-basis. Sadly, very few are aware of its extent.

Throughout our time in Houston, I constantly felt torn between crying and wanting to load our rental car full of dogs. Luckily, we were able to help area rescues pull dogs and cats out of the shelters and get them into foster homes. This effort calmed me and made me feel like we were, at least, making some sort of difference during our time there. Then we met Lexi Marie.

In the midst of meetings and tours, we drove to a place called Melrose Park. It’s a notorious dumping ground and a common spot to see more dogs than humans lining the grassy areas intended for family use. Over the years, we’d taken dogs from Melrose Park and heard these stories about how bad it was, so I was familiar with it to some degree – but I wanted to find out exactly how bad it was, firsthand.

From afar, Melrose Park looked like any other ballpark. It’s a park for humans, after all. Within 30 seconds, we spotted dogs. All around us, anxious, agitated, panting, pacing dogs.

One of those dogs was a frail boxer mix, a young female, who was pacing and obviously distressed in the 90 degree heat. Instantly, we jumped out of the car and went to tend to her. We fished a styrofoam container out of the trash to fill with water, as we didn’t have any rescue gear in our rental car. We encouraged her to drink after patiently convincing her to approach us. She gratefully wagged her tail, yet still seemed weary. She sent us signals that we may have been one of the first people to treat her with respect and kindness in her young life.

As we were tending to her, a family of dogs entered the park from across the street, checking out the place in an effort to defend their territory. Right before our eyes, the female dog – obviously a new mother with nursing puppies based on her appearance – attacked Lexi Marie.

After they rustled around for awhile, the other female retreated and Lexi Marie was able to get away. Instantly, we jumped out of the car and I went to grab her. Right after the attack, when she could’ve lashed out in her anxious and highly-alerted state, I put my arms around her and picked her up. Yes – twenty minutes before our next meeting, after we told ourselves we couldn’t do anything to help and were just there to scope out the situation. I put myself in a situation where I could’ve very well gotten badly bitten by a scared dog. My rescue brain was in full force, I guess. I know by now that just because these dogs have been through trauma and failed by humans, doesn’t mean they don’t long to love and be loved.

We were able to get Lexi Marie into our rental car, which most definitely didn’t allow animals, and we cranked the air conditioning full blast to cool her off. We quickly rescheduled our fast-approaching meeting. Then we all pulled out our phones to call the different foster-based rescues in Texas we’d previously met with and plead for them to take her in for a few weeks before we could bring her to Minnesota. Luckily, Adore Houston agreed to help, and started lining up a foster home. Instantly after getting a rescue lined up, we took Lexi Marie to a vet clinic in the city. We wanted to get her care as soon as possible – especially after the dog fight we witnessed just a few minutes earlier.

Lexi Marie’s story is, inherently, good. While she lived a sad life as a stray before we found her, she had the good fortune to be found by humans like Julie, Lexi, and myself; people who have devoted their lives to saving animals just like her. But what about these other animals that aren’t so lucky?

The city of Houston, like most of Texas, is overrun with animals. Places like Harris County Animal Shelter are trying their hardest to help. However, they are simply overpopulated, underfunded, and facing the sad truth: that few people in Texas wants to adopt these animals. Layer that with the fact that HCAS is only one of hundreds of shelters in the state dealing with these issues and you get resulting statistics like this one: Texas shelters euthanize anywhere from 30-70 animals every day with total euthanasia of around 220,000 animals a year.

So what can we do to help these poor animals? That was all I could think about as I walked through huge runs of kennels that contained up to five cats or dogs each. I took pictures of all of them, talked to them in soothing voices, and told them it was okay. But it wasn’t okay. I’m pretty sure that maybe 20% of the animals I have photos of on my phone are still alive today. Every moment someone came in and dumped off their animal at the shelter, a new name was added to that day’s euth list. Not everyone can make it out alive.

To make a long story short, I don’t entirely know what will change the overpopulation problem in Houston. I have some ideas, but they’re going to take more than just one rescue in Minnesota to implement. I believe that stronger laws are needed to protect animals, education about spaying and neutering should be at the forefront of animal care, and perspectives about animals being ‘property’ or lesser beings need to change.

In the short term, we’re trying to do more for these animals by increasing the number of dogs we take in with each Houston-based transport. We’re sending supplies and support down to the shelters and volunteers managing Melrose Park so they have additional resources to function and provide for these animals.

We’re working on longer term plans too, so we can really start to improve the conditions down there. We have big dreams, and we’re hopeful we can find advocates who want to join us in our mission.

Volunteers, fosters, donors, adopters, and partners are all needed to help us keep helping others. We need like-minded people to join forces with us to save more animals because they need us. Is that you?

As for Lexi Marie, she is starting over. She began her journey to Minnesota on Friday, September 28, because we saved her life. She arrived on Saturday, September 29, and went to a home that committed to caring for her forever even though they hadn’t even met her. She had multiple people apply to adopt her just based on her story and photo! Her story is a true testament to why we do what we do and why we need to save other animals just like her – animals who are highly adoptable and will find homes here in Minnesota if they could just get here. So let’s save their lives.

Colby the Cat: A Lesson in Perspective →